Last Sunday I brewed for the first time since I've been back from Germany. I had wanted to earlier, but August and September were way too hot. My apartment isn't air conditioned, and when beer ferments above 80 degrees (s0me say above 70) off flavors can develop. I decided to make one of my favorites, the Mahogany Mirror Ale, an American brown ale, from Al Korzonas' book Homebrewing. Incidentally, in my opinion if you are only going to read one homebrewing as a beginner it should be this one. Papazian may be a bit more fun to read, but when I want to look something up, or find a simple and trustworthy recipe this book is always the first one I pull off the shelf. The American brown as a style has the hop profile of an American style pale ale and the maltiness of a British brown. 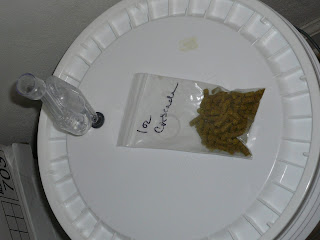 By today the bubbles in the airlock had slowed to less than one per minute, so it was time to add the dryhops. There are several reasons for waiting until this point of the fermentation to add the dryhops. One is to prevent contamination. By now the beer is somewhat acidic, has a fair amount of alcohol, and most of the fermentable sugars have been consumed. All of this reduces the chance that introducing the hop pellets will cause an infection. Another is that the purpose of dryhopping is to add aroma. If fermentation is still vigorously occurring the escaping carbon dioxide will carry the aromatics from the hops with it right out the airlock. Lastly, hop pellets sink after a few days. Normally I use whole hops for dryhopping and this isn't a problem, as the whole hops float, but this time I wasn't paying attention at the brewing store, and wound up with pellets for the dryhopping. If the pellets sink at a time when dead yeast cells are falling out of suspension the pellets can get covered and won't contribute as much to the beer. By waiting until most of the fermentation is over I hope I've avoided some of this. Here we have the beer after adding the pellets. 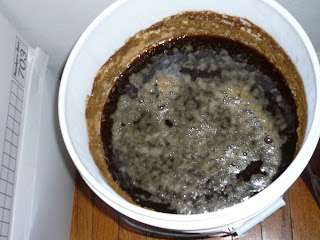 Now I just have to wait another week or so to bottle.
Posted by Aaron at 3:49 PM

How long have you been a home brewer?

From the way you write, it sounds like have been at it a while.

One of mine is something I call my "Chocolate Lager" It's similar to Abita's Turbo Dog.

I've been brewing for about five years now, but I'm not real consistent with my level of activity. This American brown is probably my favorite, although I just follow the recipe pretty closely. I want to try modifying it to use later hop additions, what I think some people call "hop bursting".