So from August 2006 to August 2007 I was living in Oldenburg, Germany while working at the university there. This was great, Oldenburg is a wonderful town and I met lots of nice people, but there were somethings that I missed. My wonderful girlfriend Laura and our incredibly bad dogs of course. But I also missed gardening and brewing. I kept thinking of things I'd like to grow or beers that I'd like to brew. During this year Laura became somewhat obsessive about her knitting blog. I had never paid much attention to blogs before, but then I started looking around and found some with really neat stuff, and began thinking that maybe posting would help organize my projects. Anyway, I plan on mostly posting about my gardening and brewing projects (hence the clever title), probably with some superfluous shots of the dogs thrown in for fun. 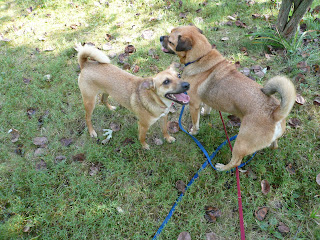 ...please where can I buy a unicorn?