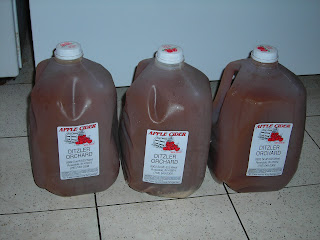 That's what the local homebrew shop, Great Fermentations, calls the apple cider they sell each fall. Its unpasteurized and specially blended for fermenting (although we think its pretty good for drinking fresh too). Last time I had some (two years ago) I made a pretty straight forward hard cider, just 5 gallons of cider and a pound of honey to raise the original gravity to
1.066. I then aged it with a bit of cinnamon and sweetened with lactose. I enjoyed it, but it was really dry and and the flavor was very delicate. This year I decided go a lot higher with the original gravity. I don't like to worry too much about what people call beverages, but I think I would refer to this year's project as a cyser, an apple mead. The recipe is:
4 1/2 gal. cider
10 1/2 lb honey
1 tablespoon yeast nutrient
1 tablespoon acid blend
1 smackpack Wyeast cider yeast 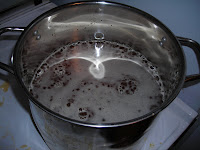 I dissolved the honey in about half a gallon of the cider in a pot over medium heat on the stove. Then I combined everything except the yeast with 4 campden tablets in a carboy and let sit for a day. The next day I stirred vigorously to drive off the sulfur and then pitched the yeast. The gravity this time was 1.121, after adjusting for temperature. It's really neat to watch the color change as the fermentation proceeds and the sediment drops out.

Edit: I forgot to give credit where credit is due. For the above recipe I borrowed from the recipes "Jerry Sadowski's award winning recipe" handed out at Great Fermentations and the "simple mead" recipe from Washington Winemaker. If you are at all interested in making wines, especially country or fruit wines, and meads, you should really check out his blog.
Posted by Aaron at 9:09 PM